The business model and service integration will be showcased for a set of hydropower applications. An increasing number of dams (> 1000 major dams worldwide of > 800 000 in total) and the significant economic relevance of water quality and sediment parameters can contribute as well to better sustainable business: Sediment related costs for the maintenance include sediment removal works, turbine efficiency losses and damage, watershed protection and are a major cause of costs (10 – 40% of maintenance costs). The main reason for fast depreciation of dams is: suspended sediment causing a significant yearly loss of dam volume – depending on the regional conditions. In fact, the yearly investments of approx 20 billion € to build new dams are eaten up by the yearly capacity losses through sedimentation. However, suitable sediment data measurements are usually not available in the planning phase. Ecological assessments analysing algae blooms, trophic state changes or nutrients also are increasingly of interest for the long-term impact assessments of the reservoirs and connected catchment areas. Thus, appropriate environmental and economic investment planning, and monitoring can significantly contribute to a better management and value preservation concepts.

Most if not all dams in the Alpine arc are subject to the accumulation of sediments. Located at an altitude of 1436 metres, Gebidem dam (Figure 6) in Switzerland is a 122-metre-high arch dam holding a reservoir volume of 9.2 million cubic metres, the installation produces 555 million kWh annually on average. From May to the end of September melting snow and melting glacier feed the reservoir. Annual flushing of the reservoir is required in order to manage the sediment load which accumulates 400,000 m3 of solid materials annually. As a result, the owner/operator is required to monitor the sedimentation of the reservoir very closely. especially during the annual flushing events. The owner/ operator is Stucky Ltd.’s client and will make available historical data with regards to the sediment concentration and quality that will be used for the calibration of HYPOS. HYPOS services could be used to identify the sources of the sedimentation and to monitor the sedimentation levels. 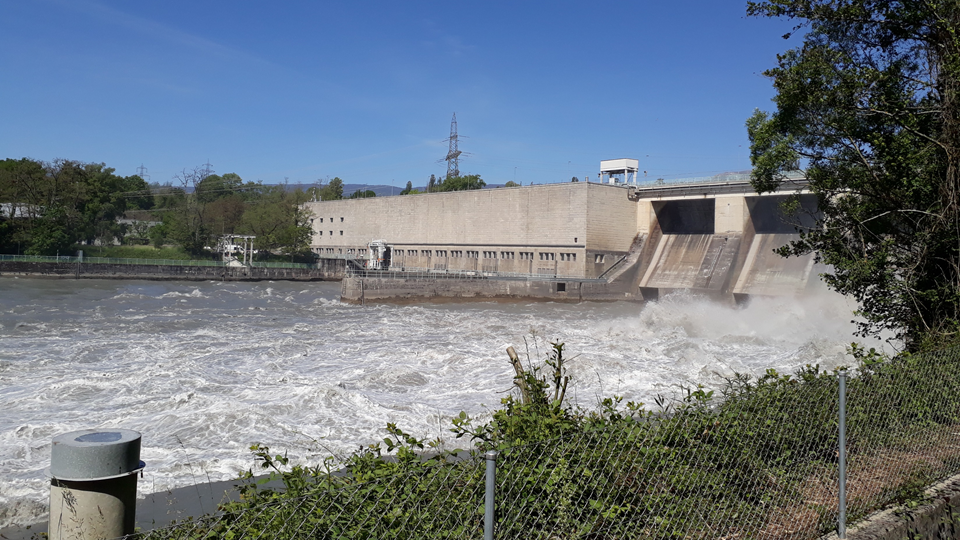 USE CASE 2: The Verbois and Chancy Pougny hydropower plant cascade

The Verbois and Chancy Pougny hydropower plants are 2 run-of-river power plant in a cascade on the Rhone river close to Geneva, Switzerland. Built in 1938 and 1925, with current installed capacities of 100MW and 49 MW respectively they essentially provide 15% of the consumption of the Canton of Geneva which is approximately 700 GWh per year. Stucky Ltd has been heavily involved in the upkeep of the dams and hydropower plants. Both Chancy Pougny and the Verbois power plants are just downstream of the Confluence of the Arve and Rhone rivers, the Arve has a very high sediment content while the rivers of the Rhone running from Lac Léman are much clearer. Both hydropower plants are obliged to manage the sediment build-up at both dams with great care as Chancy Pougny tends to stock the sediments that the Verbois dam flushes. 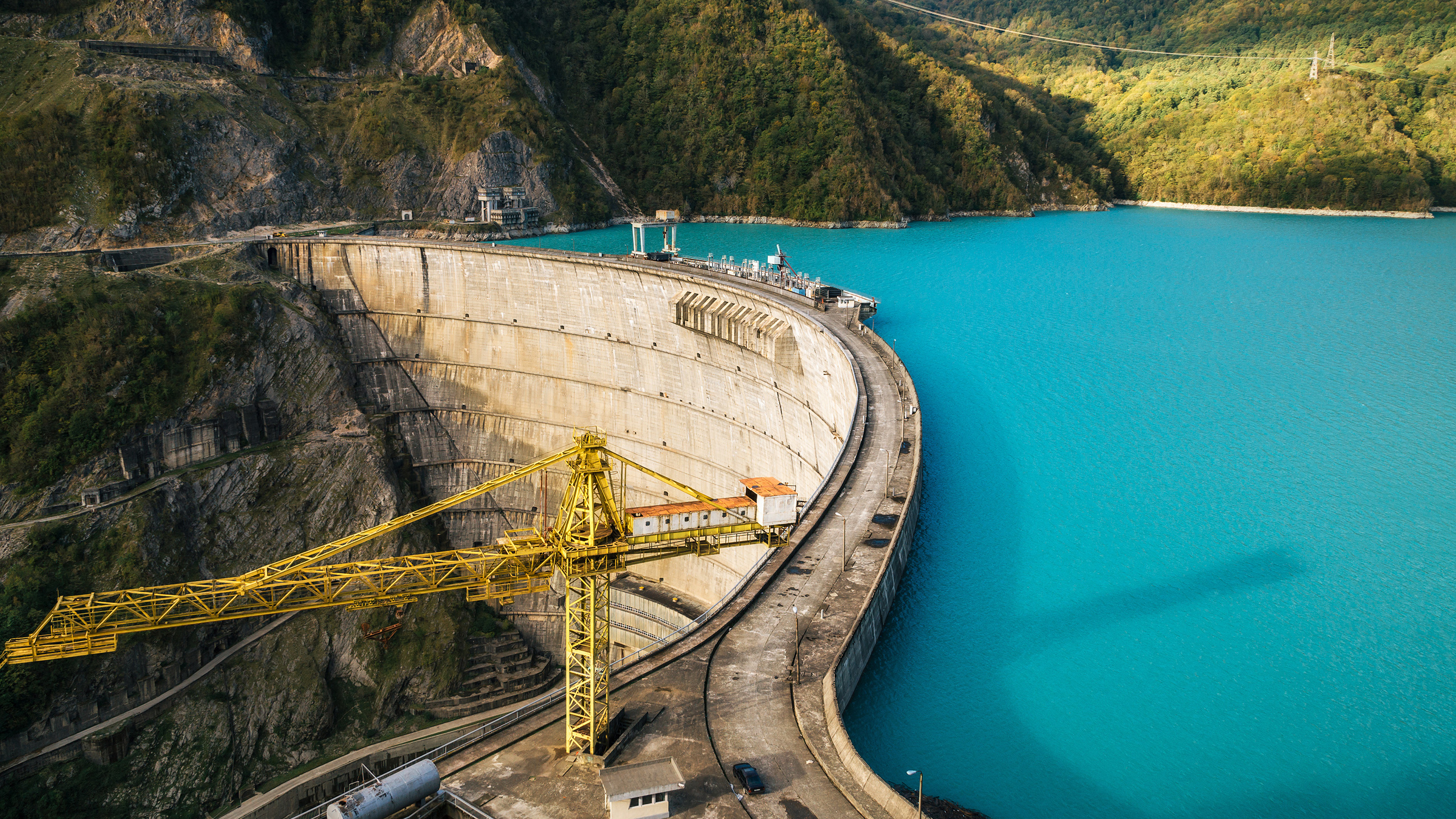 USE CASE 3: Enguri and Vardnili Dam and Hydropower plant cascade

The chain of the Enguri hydroelectric power plants (Georgia) comprises the main Enguri reservoir and Enguri 1300 MW HPP; the tailwater from Enguri HPP into the Gali reservoir and the Vardnili dam with four power plants. The Gali reservoir is created by a 57.5 m high clay core rockfill dam with Vardnili HPP #1 at its toe and three similar river channel plants – Vardnili HPP #2, 3 and 4, situated on the tailrace canal that discharges into the Black Sea. The whole cascade was severely damaged during the civil war in the 1990’s.

The Gali reservoir has a full storage capacity 145 Mio m3, length 11 km, surface 8 km2. For almost 25 years neither a bathymetry survey nor sedimentation monitoring was performed on the reservoir. In order to identify status of sedimentation and life storage of the reservoir, Stucky previously carried out the following studies in 2013:

Stucky also carried out a due diligence of the sedimentation status of the Enguri reservoir.  Bathymetric surveys of Enguri reservoir carried out in 2001-2004 and later in 2012 showed that the sediment accumulation level in front of the dam are exceeding the sills of the low-level outlets. In order to remove accumulated sediment, the outlets and to avoid the problem of sediment accumulation on the sills of the outlets, to provide normal operation conditions for the stoplog and outlet gates. 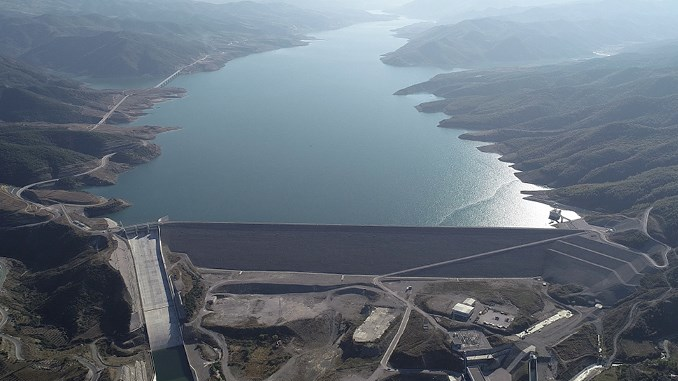 Banja hydropower plant (Figure 10) is located in Cërrik Municipality in Elbasan County, 65 kilometres southeast of Albania’s capital Tirana. The planned total production will be 254 GWh/y, from a total installed capacity of 73 MW. The power plant was officially opened in September 2016 as the first plant to be completed by Devoll Hydropower Sh.A. (DHP), an Albanian-registered company, owned and operated by Statkraft. In line with a concession agreement approved by the Albanian parliament in 2009, Devoll Hydropower will build, own and operate hydropower plants in cascade along the Devoll River in southeast Albania.

The construction of Banja at the Devoll River started in June 2013. More than 2000 workers contributed to its construction activities. The plant has three Francis turbines with an installed capacity of 73 MW. A dam height of 80 metres gives a reservoir with a total volume of 391 billion litres of water, covering an area of 14 square kilometres.

The Devoll project in Albania consists of two power plants, Banja and Moglicë, with a total output of 256 MW. Moglicë will open in 2019. In total, the two plants will have an annual production of around 700 GWh, which represents a 17-percent increase in Albania’s total energy production.

At the end of 2015 a sediment transport measurement research station has been installed to monitor the suspended load concentration every 30 min. The station is logging continuously since January 2016 in periods where the river Devoll has a water depth of more than 1m at Kokel bridge. Statkraft has been running a gauging station at this bridge since 2008. The plan is to use the SSC data to calibrate the SSC and turbidity data take in the Banja reservoir in order to ensure good data quality. It is known from previous studies that this region of Albania has a sediment yield which is comparable to any region in the Himalayan mountain range.